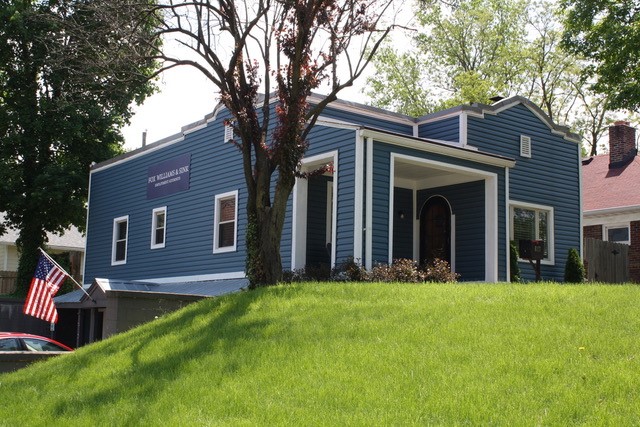 The orange textured exterior had to go, but otherwise the one-story building with a walkout basement on the edge of Broad Ripple Village was the perfect spot for the lawyers of Fox Williams & Sink LLC.

They purchased, budgeted about $30,000 for upgrades and began refurbishing, remodeling and redoing. Then they discovered termite damage. As part of the work to replace the orange with muted blue siding, the attorneys discovered the outer walls were so weak, having been eaten by the pesky insects, that only the interior walls were holding up the roof.

The unanticipated rehabilitation of the outside ballooned their budget–which ended up being close to double what they originally planned–but by the time the trio of attorneys determined the extent of the termite damage, they had already put too much money into the project to walk away. So, they reframed the entire structure at 6177 N. College Ave.

Ryan Fox recalled that the headaches did bring some arguments and questions about whether they should even be relocating in the first place. But, as he explained, the attorneys are used to having differences of opinions. The nature of their employment law practice is that they will sometimes get loud and angry, but 20 minutes later, the disagreement has passed, the clash forgotten, and they are working together again.

Fox said the entire project tested their ability to get along, but ultimately, their friendship won. “It probably brought us closer together and better as a team than before,” he said. 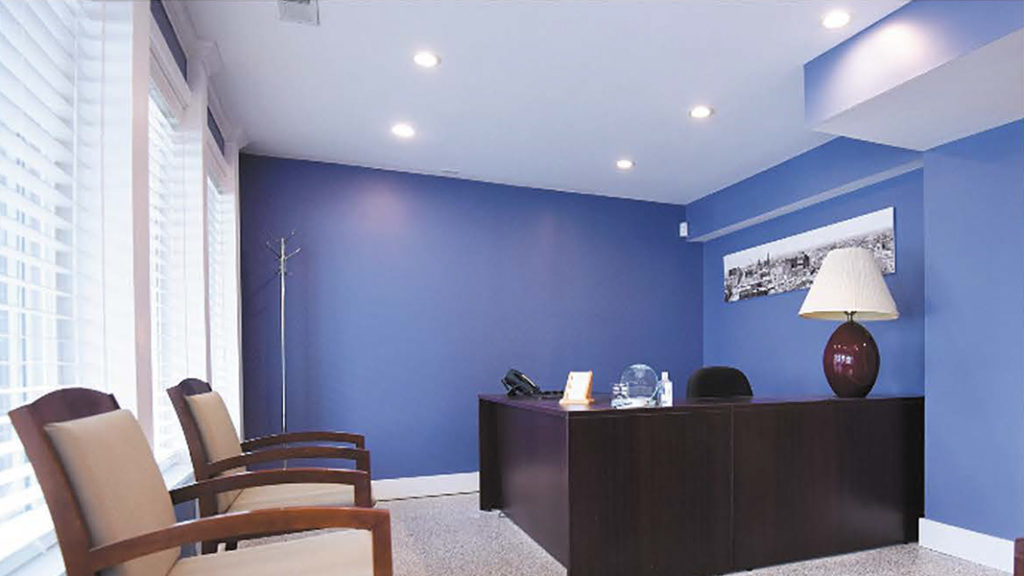 The interior is a contrast of modern and traditional looks, which Fox said was really dictated by the building itself. The walkout basement with its banks of windows has a more contemporary feel, while the main level embraces a more conservative, lawyerly appearance.

Neither Fox or Ryan Sink had a definite plan for decorating the inside. They just used their judgment and double checked their decisions with their wives. The result is kind of a reflection of their practice–different personalities that work well together.

For his office located on the basement level, Fox selected his favorite color, purple, and chose a darker shade. The workspace matches the modern vibe of his surroundings. Upstairs, Sink chose a classic color of beige for his office.

The single décor misstep, the attorneys said, came when they opted for pea green in the kitchen. The color looked better on paper.

Although the renovation is complete, the building dating back to 1928 will get a little ailments.

“We kind of enjoy coming on the weekends to do yardwork,” Fox said, “and just making the place look nice since it’s the place we call home.”